Every Wizard Has a Hat is a very rules-light, role playing game with minimalistic rules focused on free form magic wizards and player & GM interactions.

The book is not well designed but the system is there and I like it so I'll post it here, It took a while to make so I'll leave it as 1 Dollar for now but feel free to grab a community copy (I'll add more in time or if people like this shit!). Questions can be made and I may improve some of the writting or whatever in it if I feel like its needed, perhaps its too complicated? Idk

Have fun! I love you.

In order to download this wizard game you must purchase it at or above the minimum price of $2 USD. You will get access to the following files:

Support this wizard game at or above a special price point to receive something exclusive.

You want it? You can't pay for it now? Grab that shit! I want you to play it :D, leave a good rating if you liked what you saw!

I'll add more copies if needed, eventually or/and if people like this game!

Every Wizard Has A Hat is a surprisingly crunchy lightweight system in which every PC is a type of wizard with a type of hat.

The PDF is 10 pages, with a MS Paint art style that sometimes nails its chaotic, expressive approach, and that sometimes just makes the text hard to read.

The writing is similarly energetic. It takes a moment to learn how to follow it, since it has a rhythm and a style all of its own, but it's charming and it conveys the information you need to play the game.

The game's crunch sort of rolls in and out like the tide, leaving some things defined and some things up to individual groups to interpret, but the core of the game's mechanics is your meters. You have health, morale, and mana bars---each of which depletes through conflict, and refills when you do things that aren't combat. Most attacks deal one damage, or 1 morale if they're spooky, but the game encourages you to add your own higher damage weapons, stronger armor, special effects, etc.

Dice-wise, Every Wizard Has A Hat uses a roll-under system, with the size of your dice being determined by how closely one of your user-defined skills matches the task at hand. The DC is 5, and the lowest die you can roll is a d4, so having a skill that exactly matches your situation is usually an automatic success.

Combat is interesting, as it uses hidden information and pure chaos to shape its game state. Basically, everyone acts at the same time, but they do this by slipping the GM a note with their intended action. This opens up incredible windows for counterplay (and also for miscommunication,) and I suspect fights in Every Wizard would be an excellent experience even without a dice system.

For storytelling tools, there's a great set of tables to roll on for character prompts, but the book is extremely clear that they're optional.

As far as magic goes, you're encouraged to be extremely free-form with your spells, and to create your own. This definitely feels like a game where you make your own trouble, and the magic system being so loose really leans into that.

Also, there's a spellcasting rule that I can't not spotlight. If too many people use too much magic at once, Gregory shows up. Its objective is to also use as much magic as possible, thereby basically ensuring that any big spell duel will immediately go completely out of scope, requiring even *more* magic to get it back under control.

Overall, if you like chaos, and if you like games that want you to build them as you play, I'd strongly encourage you to check out Every Wizard Has A Hat. The PDF can be a little tricky to read in a few places, but the material in it is great, and has a lot of ideas that could be spun off into whole magic systems of their own.

You are awesome and respected, thank you so much.

Thank you for writing the game! 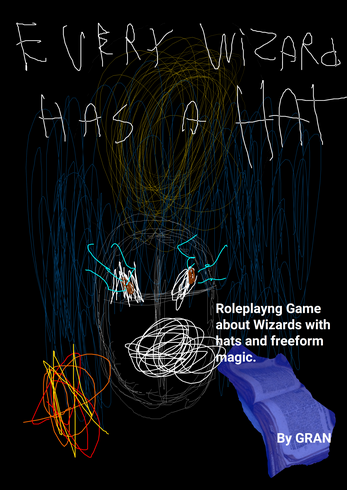